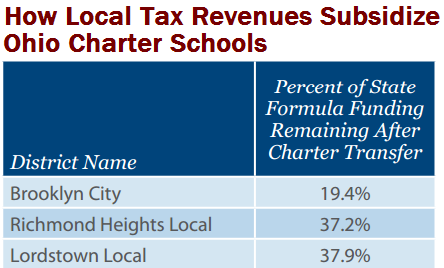 Many homeowners who vote for school levies are getting shortchanged. Instead of the additional money going to their neighborhood schools, more and more of it is being used to subsidize state-mandated funding of charter schools – many of them with poor academic records, according to a new study by the Ohio Charter School Accountability Project.

Ohio has a formula that spells out how much state funding each student in each district should receive. Some of the money is from the state and some from local taxes.

But a rarely-discussed flaw in the formula results in traditional schools often receiving far fewer state dollars per pupil than charter schools for the same students. This forces districts to make up the lost state money by either raising their local taxes or cutting programs and services.

However, data at KnowYourCharter.com shows that in the vast majority of cases that money is far more than what a school district would receive. Last year, 511 of 613 school districts in Ohio received less per pupil under the state’s formula than the minimum $5,745 per pupil received by charter schools.

The average school district last year received $4,149 per pupil, which is $1,596 less than the $5,745 base amount paid to charter schools. This means that local school districts had to decide whether to make up that $1,596 state funding shortfall by using local revenue – typically property taxes – to plug the gap, or reduce opportunities for children.[3]

Some school districts are left with significantly fewer state dollars than they would otherwise receive.[4] For example, children in Brooklyn City Schools in Cuyahoga County have less than 20% of their state funding remaining after the state pays charter schools out of Brooklyn’s state formula funding.

Here are the 15 districts whose students lose the largest percentage of their state revenue to charter schools:

When schools have 30-80% less state revenue than the state would otherwise send them, they can make up the losses in two ways – either from revenue generated by local taxes (usually property, though increasingly more often, income[5]), or by providing fewer educational opportunities for the children who remain in the school district.

In 2006, the Ohio Supreme Court ruled[6] that the state’s charter school funding scheme does not directly divert local property taxes to charter schools. As a result, it’s been suggested that students in some school districts are completely state funded and some are locally funded[7]. Therefore, the theory goes, only the fully state funded kids ever leave for charters.

However, all students are accounted for under the state’s funding formula, which means they all receive state and local revenue.

In many cases, far more state money follows the child to the charter school than the state would have sent to the local school district for the same child. When that happens, local property (and income) tax revenue, in many cases, ends up subsidizing these larger state payments to charter schools.

[2] The total amount per pupil is far more because of various additional funding weights that are added for special education, career tech and other specialties. We’ve decided to use the base amount to achieve more conservative comparisons.

[4] This calculation includes the total sent out to charter schools, including weighted funding. So the per pupil amount is larger than the $5,745 base funding amount discussed in this report. This calculation is made by looking at how much state funding a district was supposed to receive through the state’s funding formula, and how much it actually got after charter schools were paid by the state out of that money.

[5] There are 195 school districts that currently collect some level of income taxes to pay for their operations. http://www.tax.ohio.gov/Portals/0/tax_analysis/tax_data_series/school_district_data/sd2/SD2QFY14.xls

[7] http://studentlearningfirst.ohiohouse.gov/schoolfunding# at Part 8, starting at minute 7:30.