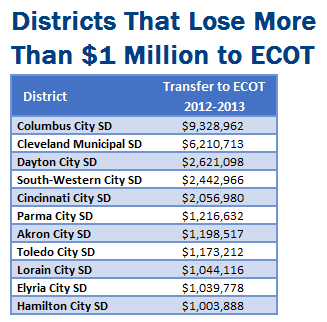 The Columbus Dispatch wrote recently of the academic failures of the Electronic Classroom of Tomorrow (ECOT) where the graduation rate of 38% is among the worst of any school in the state. Among Ohio’s 613 traditional public school districts , the lowest graduation rate is 60.9%. In addition, ECOT received all Fs and one D on the state’s most recent report card.

Despite its abysmal performance record, ECOT continues to expand. More than 14,500 children are currently enrolled, making ECOT the equivalent of the 10th largest school district in the state. The Dispatch story noted that ECOT founder William Lager has donated more than $1 million to Ohio politicians in the last five years  as his school has grown exponentially.

Failure at What Cost?

Information at KnowYourCharter.com helps clarify the burden that local public schools must bear to cover the costs of students who chose to attend  ECOT. Kids in all 88 Ohio counties are impacted. More than 95% of school districts – 586 of 613 districts – have students and  money being transferred to ECOT. As one of the state’s 9 statewide e-schools and one of the country’s largest for-profit K-12 schools, ECOT’s poor performance is exacerbated by its extraordinary financial impact on children throughout the state.

According to state data located at KnowYourCharter.com, more than 90% of the districts that had students and  funding transferred to ECOT in the 2012-2013 school year[1] had more money go to ECOT than the state would have paid the district[2]. That forces districts throughout the state to subsidize ECOT with local tax revenues to make up those per pupil state funding differences – differences that in two cases topped more than $10,000 per pupil[3].

The average difference between what the state would have paid districts for the kids attending ECOT  in the 528 districts was $2,897 per pupil  less than what was paid to ECOT. That means local taxpayers had to subsidize the difference to make up for the larger  payments to ECOT.

For districts that had at least 1 full-time student transfer to ECOT during the 2012-2013 school year, here are the biggest per pupil funding differences between what  ECOT was paid and what the state paid the district in the last school year:

Many of these school districts are among the state’s highest performers, and they are losing significant per pupil funding from the state to a school that graduates students at a 20 percent lower rate than the worst traditional public school district. Consider as well that all this money goes to a school that doesn’t have a building, lunch ladies, buses, a gym, or any one of myriad expenses endured by brick and mortar schools.

Here are some more facts from KnowYourCharter.com:

Here are the historical payments made to ECOT since it opened 15 years ago:

Below are the Ohio school districts that had more than $1 million transferred to ECOT in the 2012-2013 school year:

Here are the Ohio counties whose school districts had more than $1 million combined that were transferred to ECOT in the 2012-2013 school year:

ECOT received significant tax dollars originally meant for districts in Ohio’s 32 Appalachian counties. The chart below shows  what each Appalachian county[4] had to transfer to ECOT during the 2012-2013 school year – a total of nearly $15 million. It was in Appalachia that the Ohio Supreme Court found that the state didn’t provide enough resources to Ohio’s schools.

In addition, a recently-released study of the quality of Ohio charter schools by Stanford University’s Center for Research on Educational Outcomes (CREDO) found that children in rural areas lose almost an entire year of learning in charter schools than kids in the traditional school districts they left. Much of that failure is driven by e-schools like ECOT.

Momentum has been building in Ohio for change in how the state’s charter schools (including e-Schools like ECOT) are paid for and held accountable. The Ohio Charter School Accountability Project hopes that the data on KnowYourCharter.com  will spur policymakers to hold schools like ECOT accountable for their failures so that more hard-earned taxpayer dollars aren’t put into schools that continuously fail the state’s taxpayers, parents and children.

[1] KnowYourCharter.com will be updating the district to charter transfer data to 2013-2014 school year amounts in the coming weeks. That data has typically been finalized and made available from the Ohio Department of Education in January – a few months after the district state funding is available. In this analysis, we look at 2012-2013 district-to-charter data and compare it with 2013-2014 school district state funding.

[2] The Ohio Charter School Accountability Project looked at how much per pupil state revenue was actually transferred from each district to ECOT in the 2012-2013 school year. The amount listed at KnowYourCharter.com is an average of all transfers. But for this analysis, we wanted to be as accurate as possible about which districts actually received more or less state revenue as they transferred to ECOT.

[4] Appalachian counties as determined by the Appalachian Regional Commission. http://www.arc.gov/counties